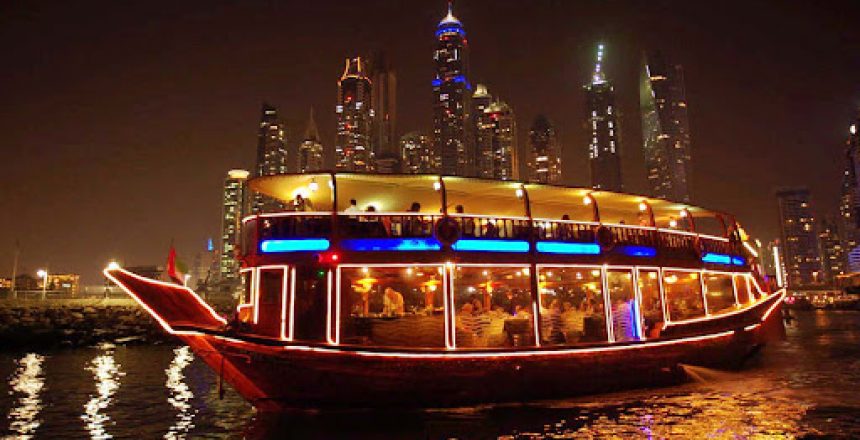 Dhow Cruise Dubai is one the best experience that you will have in your life visiting the bustling city of Dubai. Don’t worry, Dhows used to Cruise Dubia are modern to the touch. Built with all the necessary facilities that you will have a one-of-a-kind experience. Though you would believe that Dhow is simply an old fashion boat. But you would be surprised to know that Dhow has a deep and spread-out history in many cultures around the world. With its origins up to debate and with 13 different forms up to date.

Dhow can be seen both as a vassal for adventure and trade, and a romantic dinner out on the sea underneath the stars. Whether you are with you at an official meeting, a Family dinner, or trying to make a wedding anniversary work. This is an all-in-one place to celebrate any special occasion.

As said before, Dhow origin is debatable and is unknown. But it has come down to either Arab or Indians are responsible for inventing the Dhow before 600AD. Some have also tracked the use of Dhow for traveling by Portuguese. Many other places also mention Dhow. Such as the people of Swahili, Africa which had the Dhow for trading. While a Giraffe came to Chinese Emperor Yong Le’s count by using a dhow, in 1414. The dhow also come up Arabian folk tale 1001 nights, between 1706-1721. While also being appearing in trading with the pearl trade.

The people from Yemeni also traveled a long way to India for their Dhows. Because of their excellent timber, skilled shipwrights, and availability of a quality coir rope. As in previous times, the planks of a Dhow hull were held together by a rope made from coconut. Since these old times, as early as the 1920s, Britisher started to use Dhow smaller in size for long travel along with the cost. Made up of Acacia wood, these Dhow’s had a smaller sail on their movable bases to use the irregular winds of the Red Sea. Alan John Villiers, an author, adventurer, photographer, and mariner also documented his days of sailing trade in the Indian Ocean. Even going as far as to publish a book on how to navigate a Dhow properly.

Even in this modern age, Dhow still appears in the commercial industries. You can take a wonderful Dhow Cruise Dubai with your friends and family, or with someone special. People also use Dhow to make journeys across the Persian Gulf and East Africa. Transporting Fishes and Dates, to East Africa and Mangrove tree timber to the Persian Gulf.

Surprisingly there are several types of Dhows, with their uses and functions. Starting from Baghlah; meaning a “Mule”, It is a heavy ship used in the deep sea. Baqarah or Baggarah; meaning a “Cow”, is an old type of small Dhow. Barijah; usually a small Dhow. Battil; is a Dhow with a long stem topped by a large club-shaped stem head. Badan; a Dhow used in a shallow draft. Boum; is a large Dhow with a very symmetrical overall structure.

Ghanjah; is very similar to Baghlah, with a curved stem and transom. Jahazi; is a long tail Dhow used for fishing, commonly used in Lamu Island and the coast of Oman. Jaliboot or Jelbut; is a medium-size Dhow and is a modern version of Shu’ai with a smaller prow stem piece. Pattamar; is a type of Indian Dhow. Sambuk or Sambuq; is the largest Dhow used commercially in the Persian Gulf and is the most successful Dhow in history. Shu’ai; is the most common Dhow used for fishing in the Persian Gulf as well as for trading. And lastly, Zaruq; is a small Dhow, slightly larger than a Barijah.

No doubt that Being in the middle of the ocean for a lovely dinner underneath the stary sky, is one of a kind of experience. What else would more assuring than having all the modern conveniences with you while you are having a time of your life. Top-quality dining in a spacious cabin on the Dhow and even with options for open one as well. With a sensual dance and other pleasure-filled activities on the side, you will regret your time on a Dhow Cruise Dubai with us.